0
Accueil Products Can you bring portable chargers on a plane? 3 TSA rules you need to know

Can you bring portable chargers on a plane? 3 TSA rules you need to know

Many people do not know whether they are allowed to bring power banks on planes or not. The airline industry is known for being very strict regarding the items allowed on board, and unfortunately, batteries in general and power banks, in particular, are not exempt from being regulated.

In short, power banks are allowed on planes, but they need to be under a specific capacity (100Wh) and they can only be taken in the carry-on luggage.

As always, there are more details and exceptions when it comes to airline rules and regulations. So let’s have a closer look at what types of power banks you’re allowed to bring on flights.

In the United States, the Transportation Security Administration and the Federal Aviation Administration, commonly known as the FAA and TSA respectively, have a mission to provide the safest, most efficient aerospace system and to protect the nation’s transportation systems to ensure freedom of movement for people and commerce. They are the two regulating bodies that decide which types of items can go aboard planes, including power banks and other batteries. These are the rules they enforce: 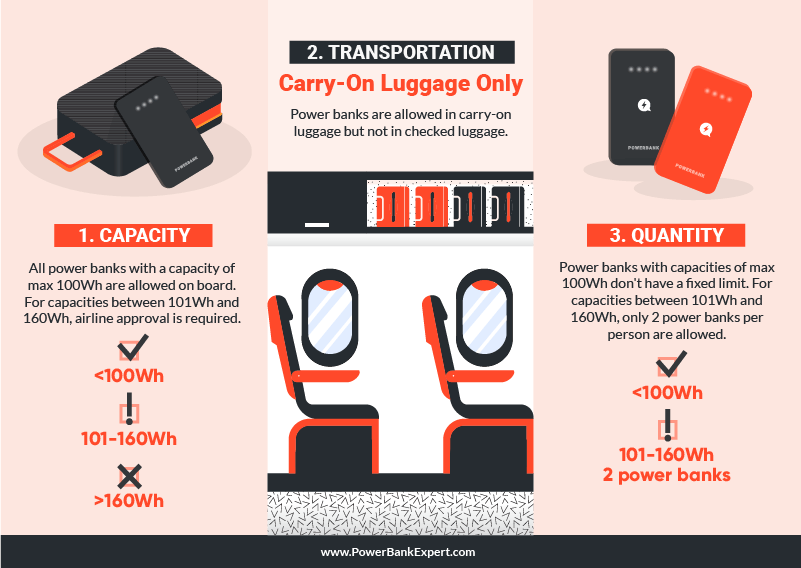 The FAA goes into precise details about taking power banks on planes: any battery that you take on board should not exceed 100Wh. External chargers or power banks are also considered to be a battery, and should not surpass a capacity of 27000mAh, or in other words, 100Wh. They also specify that batteries between 101Wh and 160Wh need airline approval, and anything above 160Wh is forbidden on the plane.

2. Power banks are to be transported in carry-on luggage only

The TSA is very straightforward when it comes to power banks. As stated, they are allowed in carry-on bags but not in checked-in bags. This rule is enforced because power banks can be hazardous and contain flammable materials, so there might be a risk of fire or even explosion during the flight. Logically, it’s easier for crew members to put out the fire if the source is in the cabin rather than in the cargo area, as there are fire extinguishers.

If you do happen to pack your power bank in your checked-in baggage, you could be later called upon to remove it from your luggage, or worse, airport security can remove it themselves and confiscate it. Either way, you don’t want any of these to happen, so make sure to place your batteries in your carry-on baggage.

It is also essential to properly pack portable batteries, in a way in which they are protected from a potential short circuit. An efficient method to pack a power bank is using the retail pack. If the pack was lost, the terminals should be covered with tape, and then the battery can be put in a case, plastic bag, or protective pouch. It is essential to make sure that they can’t be activated by accident.

3. You are allowed a maximum of two power banks between 100Wh and 160Wh

Another important aspect to consider is that each person is allowed to have no more than two batteries of 100Wh to 160Wh onboard.

There is no clear limit imposed by the TSA and FAA regarding the number of power banks under 100Wh you can carry. However, they do clearly state that all batteries must be for personal use only and that it’s not allowed to transport any batteries intended for later resale.

If you are flying around Europe or Asia, the rules may differ from the ones in the USA. Therefore, you should check the rules of your airline company and on-route airports before your flight or even booking the ticket. For example, while it is commonly allowed to have power banks up to 160Wh capacity with you, some airlines may restrict the maximum level by 100Wh.

While the FAA is the governing body in the United States of domestic airlines, the International Air Transport Association (IATA) is a trade association of the world’s airlines, which helps to formulate industry policies and standards.

According to the document “passengers traveling with lithium batteries”, issued on February 2019, power banks are considered spare batteries, which must be individually protected from short-circuiting and carried in carry-on baggage only, regardless of the capacity. It is also stated that each passenger is limited to a maximum of 20 spare batteries of any type without approval, as long as their capacity is below or equal to 100Wh. The operator may approve the carriage of more than 20 batteries.

However, passengers are permitted a maximum of 2 power banks between 100 and 160Wh in carry-on baggage only, and those with power banks and batteries of capacity over 160Wh must prepare them to be carried in cargo, in accordance with the 60th Edition of the IATA Dangerous Goods Regulations (DGR).

The following table shows a summary of such criteria:

Although most of the airports you’ll pass through implement the same rules and regulations as listed in this article, various airline companies and airports may apply different policies concerning power banks and other batteries, such as British Airways, which limit the number of batteries up to 100Wh in hand baggage to 4 rather than 20. Thus, it is advisable to contact your carrying airline in advance of travel as they may impose additional restrictions.

Another example is Thai Airlines, whose official policy is shown in the following picture: 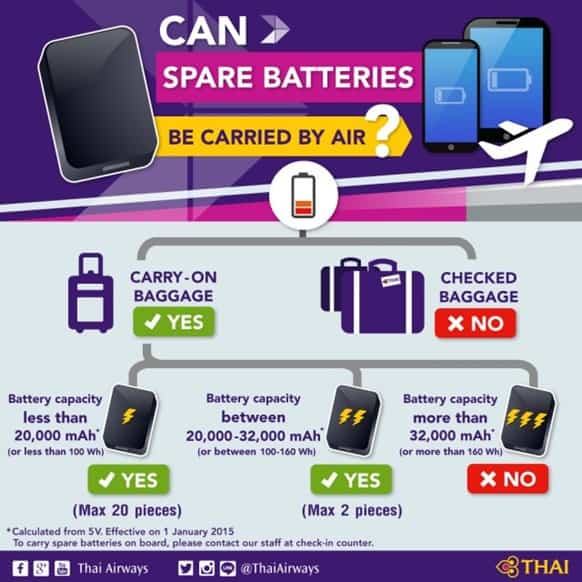 This graph shows that the airline had been implementing these regulations as early as 2015, four years before the IATA document came into effect.

Make sure your devices have a power output indicator

It may not always be stated in the airline’s policy and regulations, but you may find out upon arrival at the airport that the power bank should show the power output to comply with safety regulations.

In case your portable charger doesn’t show the power output itself, bringing the original packaging might be helpful.

If the device’s power output is not labeled, the airport security may decide to confiscate it. This situation has happened to a few people at the airport in Beijing. While passing the security check, they were asked to give up their power banks if they wanted to board the plane. After asking the reason why they were pointed to the written information letter which, unfortunately, was written in a foreign language for them.

That’s why it’s recommended to double-check the rules of a particular airline and airport. A short call or email can save you a lot of headaches at the airport.

What if you NEED to carry a larger capacity power bank?

Some people actually need to carry high power batteries either for business, health or recreational reasons. In this case, they should contact the airline beforehand and obtain a permit for their batteries and power banks. In some cases, they check them into the special luggage area.

The following list may look daunting at first sight, but it does not take too much time to go through each item, and it might save your device from being confiscated.

If you had any direct experience with power banks or other batteries during your flights, share your story in the comments!

How to determine the watt-hours (Wh) rating of a battery?

If you’re unsure of how many Wh one of your batteries has, you can easily calculate it. In order to do so, you need to multiply the volts (V) by the ampere-hours (Ah). If you are using mAh, just divide the result by 1000 (to get to Ah).

What You Should Know About Other Types of Batteries

Generally, Batteries used to power small electronic devices are allowed in both carry-on and checked luggage. These include AA, AAA, C, D, as well as 9-volt and button size battery types. Besides, one may take rechargeable batteries such as NiMH or NiCad, which are commonly used in devices such as flashlights or emergency medical equipment. These should be safely packed or placed in the device.

A measurement of ELC to watt-hours is eight grams ELC equals 100 watt-hours. To be exactly sure of this measurement and whether the battery is allowed on the airplane, it’s recommended to consult with both the airline and the manufacturer of the device.

Spillable wet cell batteries are a type of battery used in bicycles or scooters and are not allowed on the plane either in checked or carry-on luggage.

Nevertheless, battery-powered wheelchairs are allowed as long as the battery is removed from the device, which will be later placed in a special container. Passengers with this type of wheelchair should inform the airline employees that they intend to travel with this kind of battery

If the battery used in a wheelchair is non-spillable, it is allowed on the aircraft. However, these should be rated at 12V and 100Wh. Two spare batteries per passenger are permitted.

A lot of different portable devices have internal batteries such as shavers, flashlights, toys, and many others. These are allowed to be stored in the checked-in luggage, but they must be prevented from any damage or short circuit. The device should be off, and the owner should make sure that it won’t switch on by accident.

The only exceptions to this rule are electronic cigarettes and vaporizers, which are not allowed in checked-in luggage, and instead must be packed in carry-on luggage.

The following is a list from the FAA with the rules regarding taking batteries on planes as of 2016: 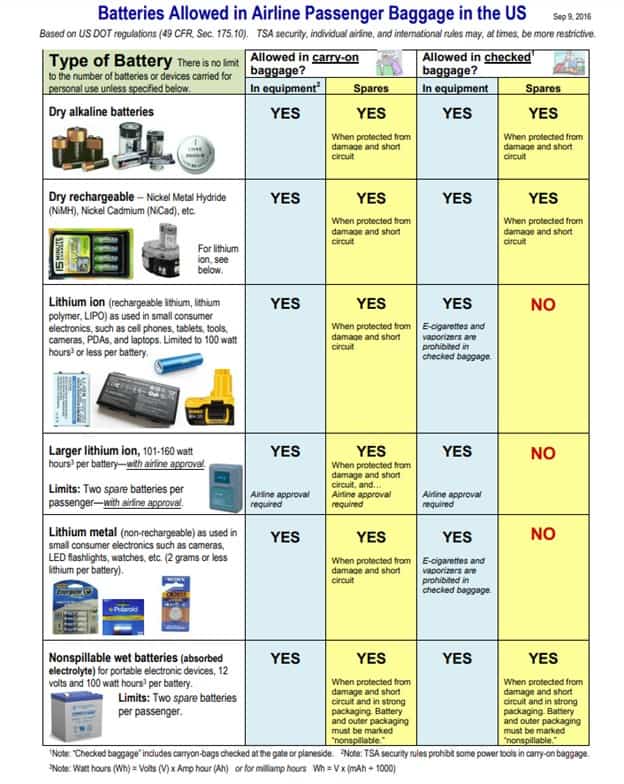 Why are power banks regulated by the TSA?

Power banks and other Li-ion batteries have come under scrutiny pretty recently. As battery technology improved, more and more battery-powered items found their way onboard planes. However, given their relatively unstable nature, accidents were bound to happen. After a series of battery-related incidents, some of them pretty serious, they became a subject of regulation. In the image below you can see the evolution of battery-related incidents on planes.